MARTY FROMM, my dear friend in eternal Glory with Yeshua, his Messiah + ISI Radio Archive Interview with him from March 2010 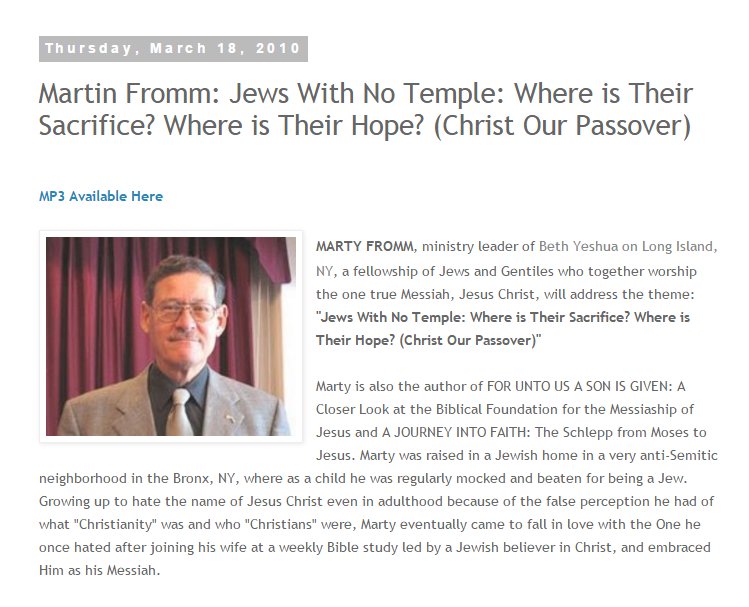 About 30 years ago, as a young single man & recently born-again believer in my early 20s, I ventured out one evening with a few of my fellow single brothers in Christ to find some Christian singles gathering that we had heard was taking place in eastern Suffolk County, Long Island. Providentially, we got lost, & wound up at a little church building in West Sayville with a parking lot filled with cars. Could this be the singles event we were looking for? No, but it was an event where God wanted me to be. It turns out that this was a “Shavuot” celebration, a Jewish festival that was being observed by a group of Jewish & Gentile believers in Christ called “Beth Yeshua” (“House of Jesus” & “House of Salvation” in Hebrew). The man leading that celebration was Marty Fromm.

I heard the fascinating testimony of this dear man, who was raised in a Jewish home in an extremely Anti-Semitic neighborhood in the Bronx, NY, during the 1950’s. Marty grew up hating Jesus Christ and Christians (at least the false conceptions he had of both due to the cruelty against Jews he experienced from Gentiles in the neighborhood of his youth), but eventually, miraculously, embraced Jesus Christ, “Yeshua Ha’Mashiach”, as his Messiah, in adulthood, after a number of visits to a Christian Bible study his wife had been attending, led by a Jewish woman named Clara Rubin, who was a born-again believer (who had been led to Christ many years earlier at age 14 through the agency of Chosen People Ministries). Marty would sit patiently week after week in an adjoining room in Clara’s home, waiting for the Bible study to be over so he could take his wife home, but he never imagined that his eavesdropping into what Clara taught at this study would radically change his life forever. He angrily confronted Clara several times, challenging her to prove to him from his cherished & sacred Jewish Scriptures that Jesus Christ was indeed the promised Messiah. By the power of the Holy Spirit, God in His sovereignty, mercy & grace, used that dear, zealous Jewish woman to do that very thing. Eventually Marty rose up to be an evangelist himself & started Beth Yeshua ministries on Long Island, which had a Suffolk County location led by Richard Saxon (a Gentile believer) & a Nassau County location led by Marty. God would use both of these precious men to lead many to Christ over the following decades, Jews & Gentiles alike.

I am so grateful to my Sovereign God that I got “lost” that night (by His design) & wound up making two friends, Marty Fromm & Richie Saxon, who would both become closely attached to me for all the years subsequent to “accidentally” meeting them 3 decades ago. I had known that Marty was ill for a number of years but he was a very private man when it came to his own suffering, & therefore I knew very little of the seriousness of his health related trials. Then, a couple of months ago I leaned Marty had been diagnosed with terminal brain cancer, & then quickly came to know that his prognosis was not good. When I got word tonight from Marty’s dear friend & co-laborer Ron that Marty had entered into eternity, my emotions were obviously mixed. I wish I had the opportunity to say goodbye to my dear friend while he was still on this earth, but I know undoubtedly I will be able to say hello to him again one day on the other side of Heaven.

As much as those who grieve over his loss may wish he was still with us, I know without question that Marty is exactly where he wants to be, & in spite of his love for us, he would never for a second want to leave where he is right now even if to just briefly enjoy our company here. There will be an eternity for that, now waiting in Glory for us fellow believers in Christ, when we get to that great reunion party at the Marriage Feast of the Lamb!!

Attached is an interview that took place on the old Iron Sharpens Iron Radio show back in March of 2010. Here is the original post from that date: